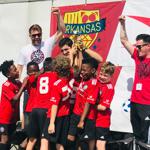 In the fall of 2018 the LR Rangers Academy launched our “Young Bucks” program for children in the 4-6 year old age range. The sessions will be 45 minutes to 1 hour a week for 8 weeks each season. The sessions will be instructed by Rangers players and the curriculum will be provided and overseen by Coach Ante Jazic. Young Bucks’ parents will participate occasionally, sometimes overseeing a training station, especially with 4 year olds. The program is designed to encourage the player to fall in love with the game, while at the same time, providing the players and parents a strong foundation in basic movement skills like jumping, landing, kicking, throwing and catching in a fun and safe environment.

In the fall of 2019 the LR Rangers Academy began forming boys competitive teams. Our boys compete in the ASA State Classic League. Future plans of our Academy include creating a girls program.