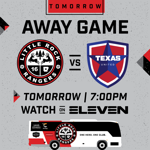 Dallas, Tx. - Just days after the home fixture against Texas United, the Rangers traveled to Dallas to play in the reverse fixture. After a heated 2-1 loss at home on Saturday, the Stags were looking for a positive result to keep them in the hunt for the league.

Texas United got the first goal of the game after a move that led to an outside the foot shot found the back of the net. But the Rangers kept pushing for the equalizer. It was the halftime substitute Cian Lynch that turn the tides for the Rangers, creating two very good chances early in the second half.

After a corner kick in the 51st minute was cleared out, Carlos Beltran put a high ball back into the area, which was knocked down by Lynch. The ball found the feet of the captain, Lance Crabtree, who poked the ball past the United goalkeeper who was out of position. The match went even from style of play to the score line.

Neither side was able to find a winner, giving the Rangers a draw for the first time this season. The Stags return home this Saturday night to take on Louisiana Krewe. Kickoff is set for 7 P.M. at War Memorial Stadium.